Neurotransmitters are substances produced and secreted by a neuron to cross the synapse space between neurons. They comprise several different families of compounds, including amino acids, peptides, and biogenic amines. A key structural feature of neurotransmitters is their high conformational flexibility. This dictates molecular shape, which, in turn, has a great influence on both transport properties and molecular recognition processes at the receptor site. The study of the intricate processes of neurotransmission at the molecular level and the interactions of neurotransmitters under complex biological conditions must be preceded by detailed characterization of the conformational properties of the neurotransmitters in the absence of intermolecular interactions, thus avoiding alterations of their intrinsic structural preferences, matching the conditions found in the gas phase.

Combining molecular-beam Fourier transform microwave (MB-FTMW) spectroscopy with heating methods, we have characterized the conformational panoramas of several neurotransmitters in the gas phase, including 2-phenylethylamine, p-methoxyphenylethylamine, norephedrine, ephedrine, and pseudoephedrine. However, the investigation of a complete series of neurotransmitters by MB-FTMW spectroscopy is not possible because of the high melting points and associated very low vapor pressures of these compounds. Laser ablation in combination with molecular beams and microwave spectroscopy (LA-MB-FTMW spectroscopy)has proven to be a powerful tool in the investigation of the gas-phase conformational behavior of solid neurotransmitters such as taurine, tryptamine,γ-aminobutyric acid (GABA),serotonin,dopamine, octopamine and synephrine.

The rotational spectrum of neutral dopamine has been investigated for the first time using a combination of Fourier transform microwave spectroscopy with laser ablation. The parameters extracted from the analysis of the spectrum unequivocally identify the existence of seven conformers of dopamine. 14N nuclear quadrupole coupling interactions have been used to determine the orientation of the amino group probing the existence of stabilizing N–H···π interactions for all observed conformers. 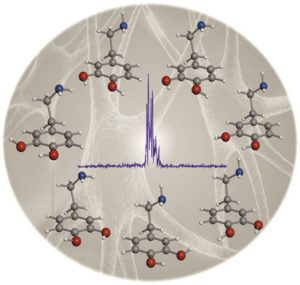