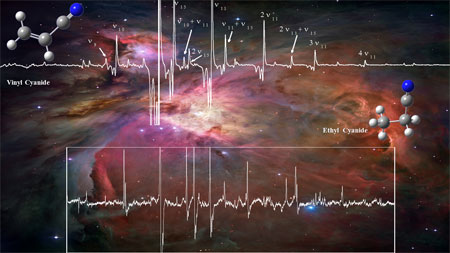 The chemistry of the interstellar medium is uncertain so research is being undertaken to improve our molecular understanding of the universe.

Through the research projects Consolider and Nanocosmos, GEM is contributing to the identification of metal bearing compounds and new species in the interstellar medium. The precise detection of these molecules is crucial for the interpretation of the spectra recorded by the new astrophysical observatories as ALMA and Herschel.

In the last decades, there has been much interest in metal-containing molecules in interstellar space, because they are thought to be key species in stellar evolution. In the envelope of the late-type star CW/Leo/IRC+10216, several metal-containing species have been observed, including NaCl, KCl, AlCl and AlF, AlNC, NaCN, MgNC or HMgNC. Most of these species are unstable and very reactive that cannot be synthesized for spectroscopic studies by traditional methods. However, pulsed Fourier transform microwave spectroscopy combined with new molecular production techniques such as laser ablation or nozzle dc discharge sources enables the generation and spectroscopic investigation of unstable species.
In this laboratory the instantaneous generation of new molecules occurs within the environment of a transient plasma created by laser ablation of a solid material or electrical discharge through a gas sample. In so doing, we have generated and characterized the aluminum and silver acetylides (AlCCH and AgCCH), aluminum cyanoacetylide (AlCCCN) and hydromagnesium isocyanide (HMgNC) using laser ablation molecular beam Fourier transform microwave spectroscopy. For the latter, the derived laboratory data has enabled its detection in the carbon-rich evolved star IRC+10216.

We report on the detection of hydromagnesium isocyanide, HMgNC, in the laboratory and in the carbon rich evolved star IRC+10216. The J=1-0 and J=2-1 lines were observed in our microwave laboratory equipment in Valladolid with a spectral accuracy of 3\,KHz. The hyperfine structure produced by the Nitrogen atom was resolved for both transitions. The derived rotational constants from the laboratory data are B0=5481.4333(6)\,MHz,D0=2.90(8)\,KHz, and eQq(N)=-2.200(2)\,MHz.

We have derived a column density for HMgNC of (6±2)×1011\,cm−2. From the observed line profiles the molecule has to be produced in the layer where other metal-isocyanides have been already found in this source. The abundance ratio between MgNC and its hydrogenated variety, HMgNC, is≃20.

New molecules in the ISM

The origin of the molecular universe starts with the injection of material into the interstellar medium by stars in the later stages of their evolution. Understanding its chemical evolution and its relationship to the origin of life is a key problem within astrophysics. Over the last 30 years, more than 150 molecules have been detected in interstellar medium (ISM). These range from simple diatomics such as molecular hydrogen and carbon monoxide, to very complex species such as large carbon chains. New European and/or US observatories coming on line will increase the existing inventory of the molecular universe by orders of magnitude.
The identification of specific species in space requires direct comparison of the particular frequencies of emission or absorption lines observed in ISM with spectroscopic measurements of known species in a controlled laboratory experiment. Over the last years, our laboratory has provided frequencies of new vibrational states of ethyl cyanide and vinyl cyanide, important interstellar molecules with very dense rotational-vibrational spectrum. These states have been identified in the ISM towards the Orion nebula (Orion KL). More recently, new laboratory data of ethyl mercaptan in the millimeter and submillimeter-wave domains (up to 880 GHz) have allowed the detection of gauche-CH3CH2SH towards Orion KL for the first time.

New laboratory data of ethyl mercaptan, CH3CH2SH, in the millimeter- and submillimeter-wave domains (up to 880 GHz) provided very precise values of the spectroscopic constants that allowed the detection of gauche-CH3CH2SH toward Orion KL. This identification is supported by 77 unblended or slightly blended lines plus no missing transitions in the range 80-280 GHz. A detection of methyl mercaptan, CH3SH, in the spectral survey of Orion KL is reported as well. Our column density results indicate that methyl mercaptan is

*The millimeter wave spectrum of methyl cyanate: laboratory study and astronomical search in space
A&A, 2016, 591, A75

*Laboratory characterization and astrophysical detection of vibrationally excited states of vinyl cyanide in Orion-KL,
A&A, 2014, 572, A44