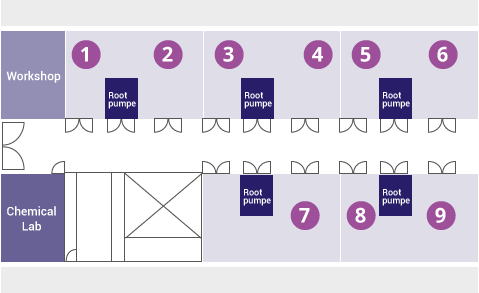 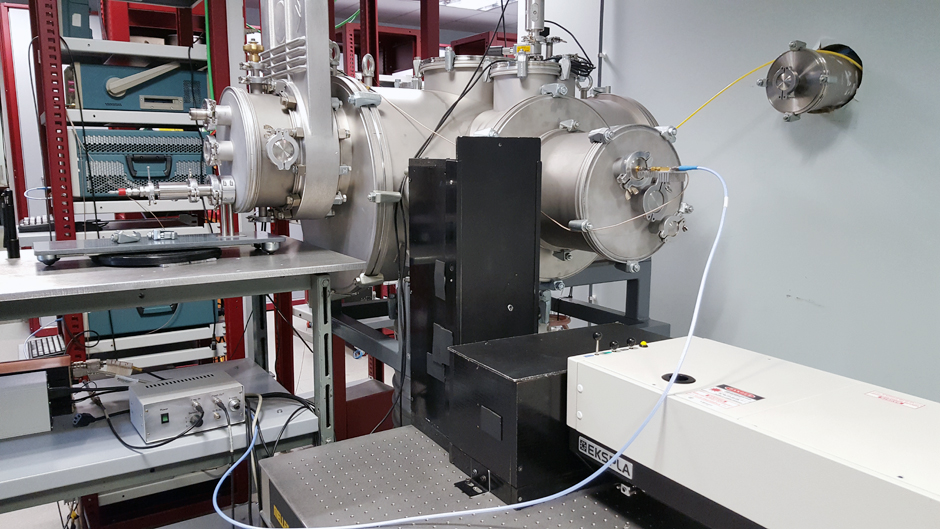 In the last years, a new approach of high resolution rotational spectroscopy which provides a sensitive method for broadband detection (CP-FTMW) has been developed. Basically, a microwave pulse that contains a fast linear sweep, or chirp, is used to polarize the sample. This new approach increases the speed of the spectral acquisition, making more efficient the search of different coexisting species in the jet. However, up to the moment, the study of the broadband rotational spectra of solids with high melting points has not been viable due to the vaporisation difficulties. A challenging solution to these problems is the performance of a new experimental setup which combines a chirped-pulse Fourier transform microwave (CP-FTMW) spectrometer with a laser ablation LA source. Taking advantage of our experience in this field, we have recently built a broadband microwave spectrometer with laser ablation to study large systems in the 2-8 GHz frequency range. 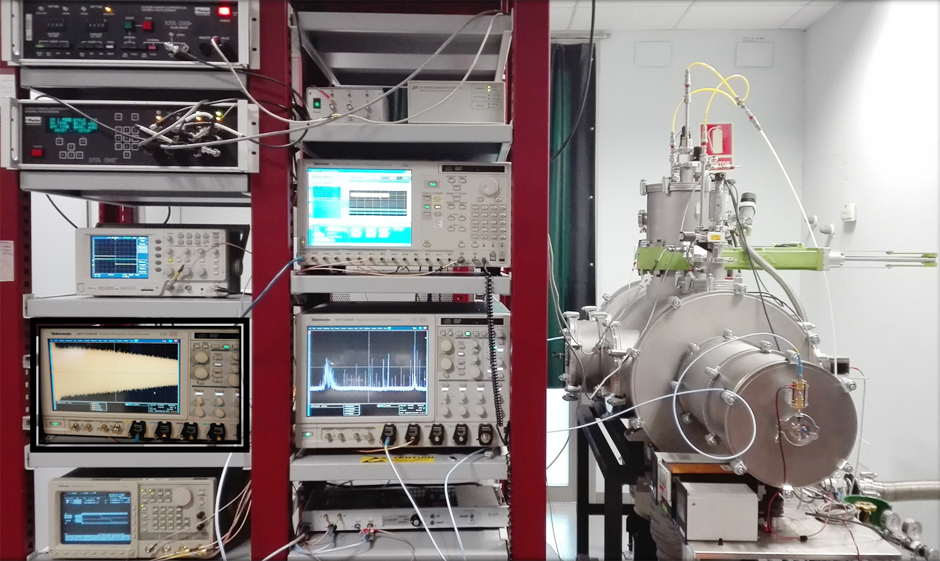 A new chirped-pulse Fourier transform microwave (CP-FTMW) spectrometer has been recently built in the 2-18 GHz band to study volatile molecules and their complexes. A new set of high-gain microwave horn antennas are used to broadcast the high-power chirped-pulse and receive the broadband molecular emission. The higher directionality of these horns makes it possible to increase the horn separation and, therefore, to include up to five pulsed nozzle sources, reducing the measurement time and the sample consumption (Phys. Chem. Chem. Phys., 2013, 15, 11468-11477) 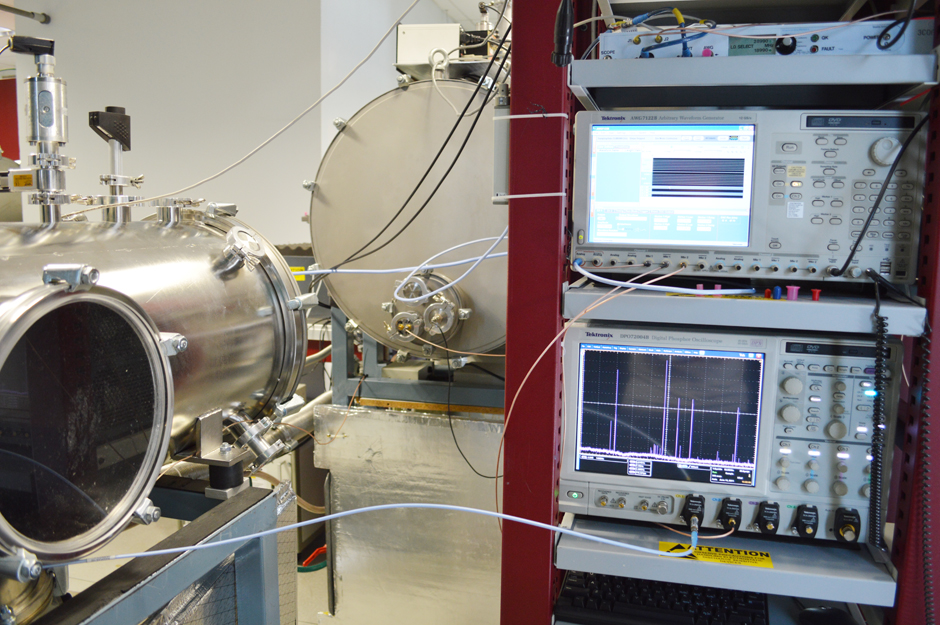 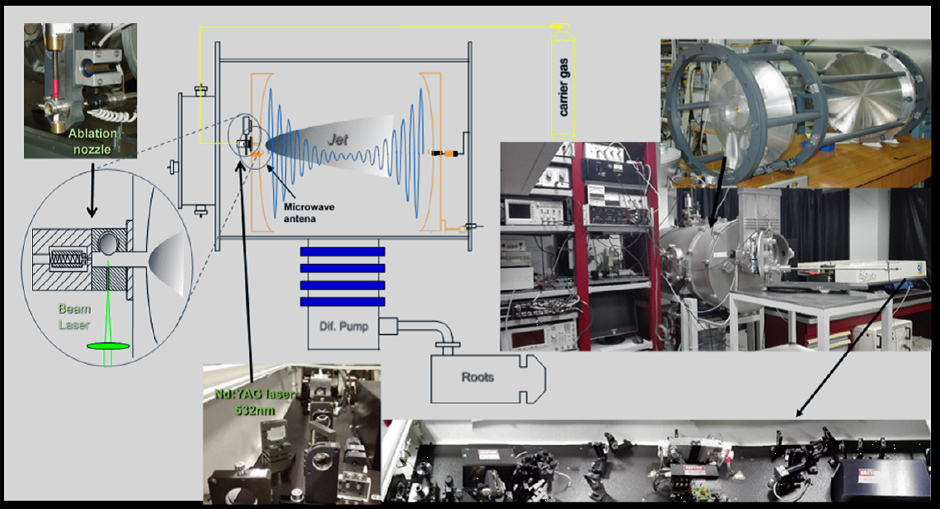 A spectrometer that combines laser ablation (LA) capabilities with molecular-beam Fourier-transform microwave spectroscopy (MB-FTMW) has been constructed and developed to obtain the rotational spectrum of solid organic molecules in the 6 to 18 GHz frequency range. Laser ablation is produced by UV radiation using a ps Nd:YAG laser. The laser hits a solid rod placed on a specially designed pulsed nozzle, coaxially oriented with the axis of the microwave spectrometer Fabry-Pérot cavity. The vaporized molecules are seeded in the supersonic jet formed by the expansion of a carrier gas (Ar,Ne) and probed by FTMW spectroscopy. The high sensitivity of the spectrometer is exemplified with the observation of minor isotopomers in natural abundance of different organic molecules. 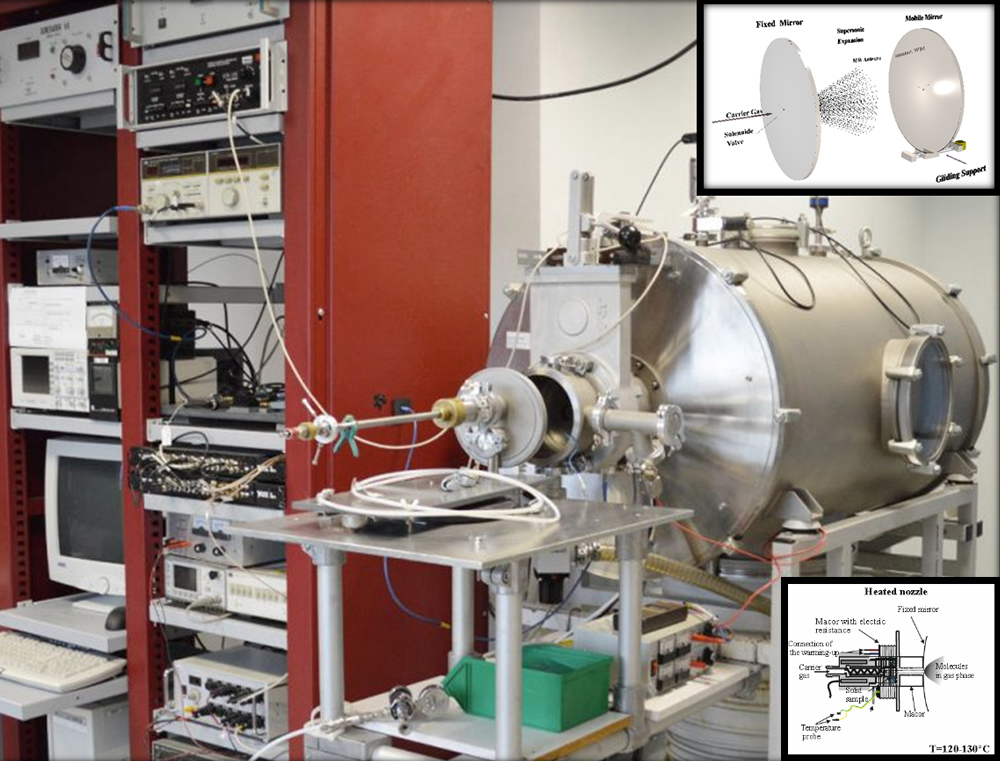 In this spectrometer cm-wave radiation (6-18 GHz) is used to probe the species in a supersonic jet. The molecules under study range from stable species that are seeded in the supersonic jet, to weakly bound complexes or short-lived species generated in the supersonic jet. A series of short microwave pulses at fixed frequency are applied to a jet within a microwave resonator. After each excitation pulse the weak molecular response is recorded in the time domain. The transition frequencies are obtained from a Fourier transform of the time-domain spectrum. Different pulsed nozzles can be used: simple pulsed nozzle, a DC-discharge system to synthesize new molecular species in the jet or a heating nozzle to vaporize solid molecules with low melting point. These systems can be coupled with a water reservoir to generate water complexes. 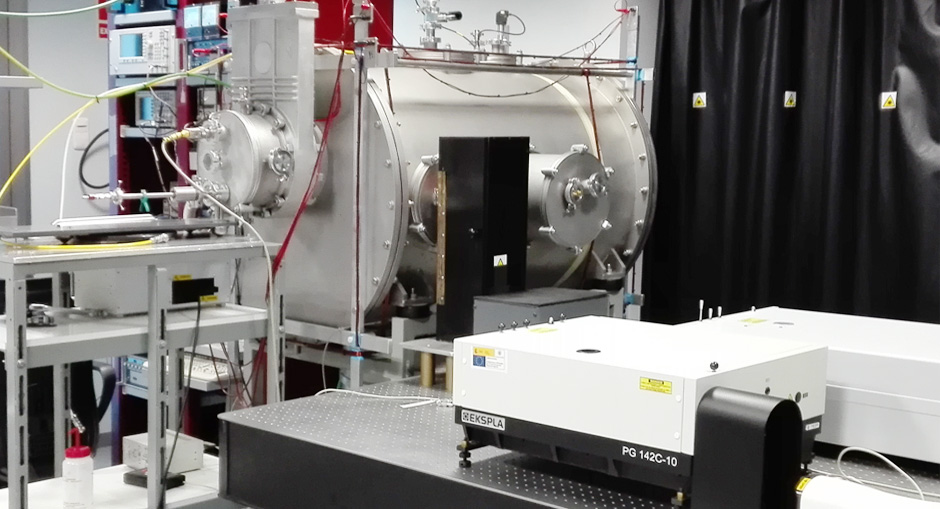 A new configuration of the LA-MB-FTMW spectrometer has been recently developed to study large molecular systems at low frequency ranges (2-8 GHz). Initial investigations devoted to aliphatic amino acids have been extended to complete the conformational panorama of proteinogenic amino acids (histidine,tryptophan), peptides, neurotransmitters, drugs or sugars. This instrument opens new perspectives in the investigation of the gas phase structure of larger biomolecules. Recently, the structure of the isolated nucleoside uridine has been observed for the first time. 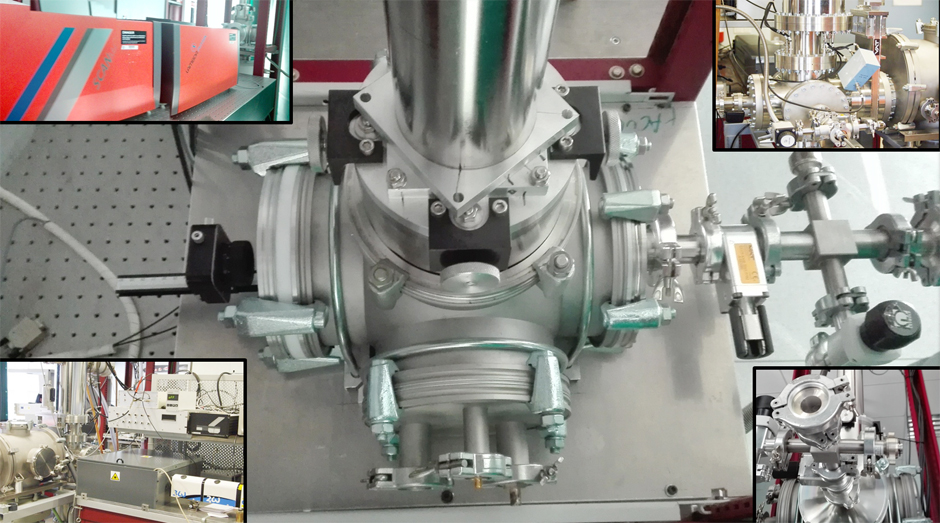 Direct chemical analysis of solids without chemical pretreatment can offer many advantages for the analytical chemist. Elimination of chemical solvents and wastes, reduced sample handling, and faster analysis times are some of the motivations for developing such techniques. Laser ablation is one of the leading areas being investigated for direct solid sample analysis. Focusing a short pulse laser beam onto a sample will create an explosion that produces atoms, ions, clusters, and particles for direct analysis by mass spectrometry. Our laser ablation time of Flight Mass spectrometer (LA-TOF-MS) consists in 1 meter long TOF tube with a reflectron and dual multichanel plate detector (RM Jordan, model D-850) with extractor and repeller plates modified with two high voltage rapid switches in order to use them. The laser beam (Quantel Brilliant, model C07.BR) is introduced into the chamber through a high energy mirror situated in the right port of the chamber that allow to align the beam to be centered between the extractor and repeller plates. This system is being employed to obtain the mass spectra of solid drugs and to identify the presence of illicit drugs such as ecstasy in real samples (confiscated by the Police). The analysis of the fragmentation pattern observed in mass spectra my help to understand the photofragmentation phenomena produced by laser ablation, which differs from those observed with the conventional ionization methods. 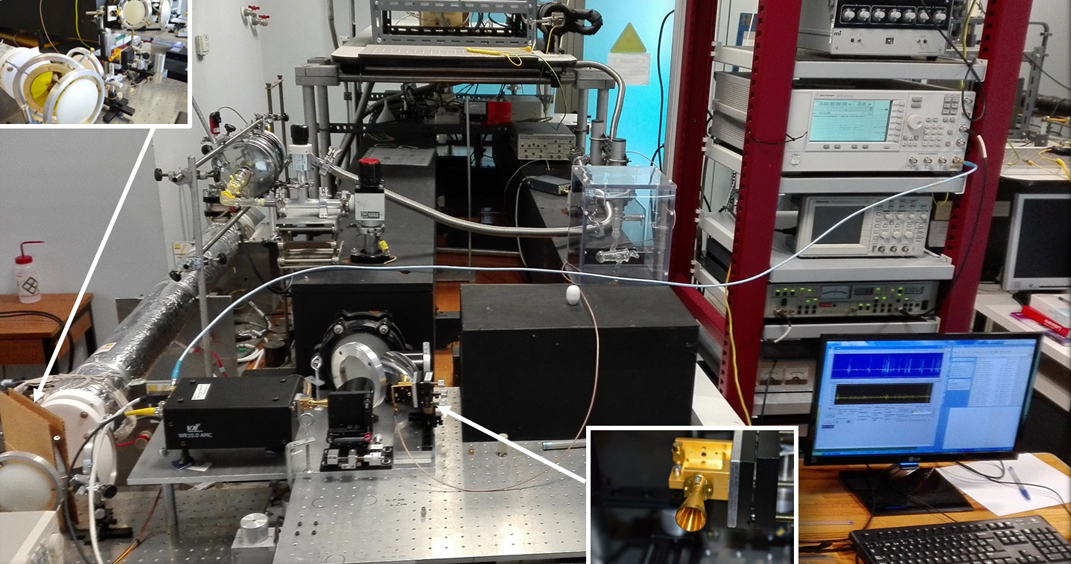 Single and double path configurations of the millimeter and submillimeter wave spectrometer from 50 to 1080 GHz have been developed to study new molecules in the ISM. The microwave source is a frequency modulated signal generator operating from 250 kHz to 20 GHz, phase locked to a Rubidium standard. In the double pass configuration, the microwave frequency is multiplied by 4, 6 or 9 using amplifier multiplier chains AMC WR15, AMC WR10, or AMC WR6.5 from VDI, Inc., with average powers of 34 mW, 17 mW, and 4 mW, to reach the frequency ranges of 50 – 75 GHz, 75 – 110 GHz or 110 – 170 GHz, respectively. The optical path length of the free space cell of 3.6 m is doubled using a polarization grid and a home-made rooftop mirror. The output signal, after the second pass through the cell, is detected by the corresponding solid state Schottky diodes detectors WR15, WR10 and WR6.5 from VDI, Inc. Rotational spectra above 170 GHz are measured in a single pass mode configuration using parabolic metal mirrors (Edmund Optics, Inc.) as focusing optic elements. An active VDI sextupler AMC WR9.0 (average power of 25 mW) is initially used to produce a suitable frequency input for additional active and passive multipliers (VDI, Inc.) connected by waveguide to its output.

The active doublers WR4.3 and WR 2.2 are connected to a 12V bias implemented directly in the WR9.0 while the passive triplers, WR 2.8, WR 1.5, and WR1.0 require no bias. Using combinations of these multipliers, the frequencies of 170 – 240 GHz (WR4.3), 240 – 360 GHz (WR2.8), 340 – 480 GHz (WR4.3 and WR2.2), 510 – 720 GHz (WR4.3 and WR1.5), and 720 – 1080 GHz (WR2.8 and WR1.0) are reached with average powers of 3 mW, 0.9 mW, 0.2 mW, 50 mW, and 9 mW, respectively. A broadband Quasi-Optical Detector (QOD) from VDI, Inc. and liquid helium cooled silicon bolometer (Infrared Laboratories, Inc.) are used as the detection elements. For both configurations, detected source frequency-modulated signal is amplified and send to the lock-in amplifier (SR510, Stanford Research Systems, Inc.) where 2f detection is applied, where f is the modulation frequency, to increase the sensitivity of the measurements. Modulation frequency of 10.2 kHz is used for the non-cooled (room temperature) detectors while 90 Hz for the cryogenic detector and the modulation depth is determined to give the Doppler line width. The generator and the lock-in amplifier are connected by standard GPIB to the computer and controlled by a laboratory developed LabVIEW program. 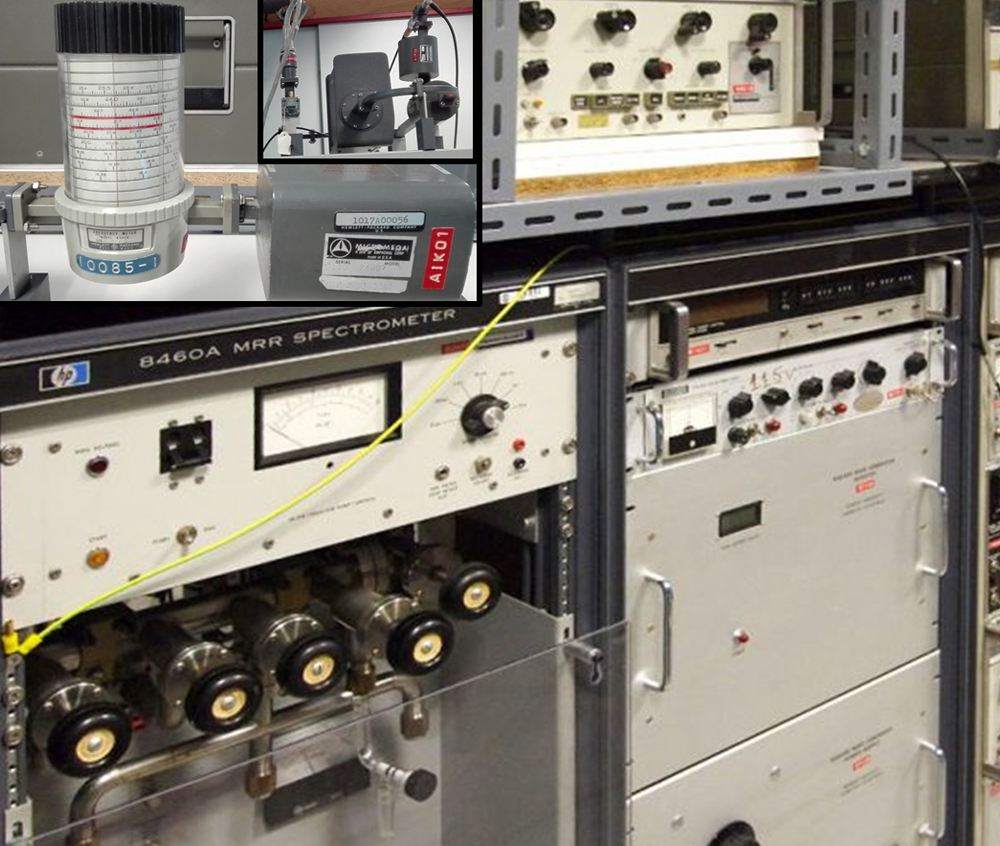 This spectrometer uses microwave radiation in the range 8-100 GHz to probe a static gas sample, recording the mw absorptions of the sample molecules. Centimeter-wave radiation in the 8-40 GHz range is produced by tunable backward wave oscillators (BWOs), which can be doubled in frequency using AsGa multipliers.

The cell is a 2 m long waveguide section with a central septum which allows the application of electric fields (Stark modulation) to the sample. The actual setup can be configured to perform RF-MW double resonance experiments.

Calculations are being carried out at our ‘Olimpo’ Beowulf Cluster facility, recently installed in our laboratory 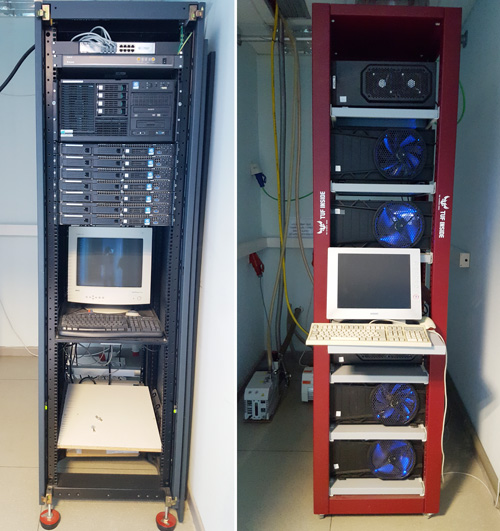